A New Paradigm in Capital Efficiency – Implications for Incumbents

Since the earliest days of the Industrial Revolution standards of living have progressively improved in many parts of the world.

Until recently these improvements were characterised by:

These characteristics were driven by a number of factors:

In the Australian context the gradual shift away from manufacturing to services is reflected in the following ABS statistics on value add across the economy: 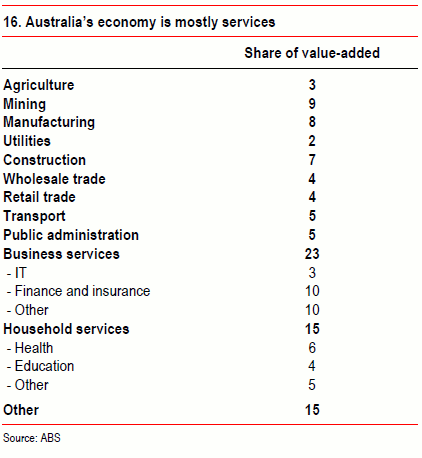 In the next few years this process will undergo a radical shift in that:

If the last 200 years can be compared to the progress of a glacier, over the next few years the confluence of cloud computing and crowdsourcing will amount to a wave of ‘creative destruction’ that will invalidate incumbent business models across numerous industries, and particularly those centred on knowledge-based tasks or intellectual property that can be deployed in a generic fashion over cloud-based networks.

The justification for this prediction is simple:

This price deflation is driven by two factors, both of them reflecting a new paradigm in terms of capital efficiency.

The new capital expenditure paradigm is reflected in the following extract from an upcoming article entitled The Future of Work by Suncorp Chairman Ziggy Switkowski:

“In the near future ubiquitous broadband, inexpensive computing power, smart algorithms, cheap data storage and 24/7 services provided by the crowd might bypass established financial institutions and enable a world of one-to-one transactions. Imagine a sort of Wikipedia model for corporate processes where the company role is merely a curatorial one.

Got a technical issue? Invite the crowd to solve it or share their experiences. Need a breakthrough in R&D? Define the problem on the net and invite solutions in return for peer recognition or a small prize. Need start-up funding for an original idea? Ask online for individual contributions in return for preferred access to the innovative product once produced.

This web-enabled, crowd-sourcing model leverages low-cost access to discretionary effort from the global online community. It hints at virtual companies rather than those hamstrung by depreciating assets, sales and service teams, and real estate. Boards of management might perform curatorial roles of communities within the crowd that contribute to elements of the supply chain in a commercial ecosystem.

As with social media, today’s companies continue to grapple with the possibilities and the risks of peer-to-peer commerce coupled with crowd-sourcing. And in the future the solutions may involve new company forms.”

Mclowd itself is a mirror of these trends.  The design process has been driven by a small number of Trustees who have contributed their time and expertise, while the Platform and Marketplace are being built by a global Team leveraging all the latest tools for online working.

One of the consequences of this collective effort by the crowd is that Mclowd has deployed only a fraction of the capital that would have been required to achieve the same outcome even a few years ago, as illustrated by the following diagram. 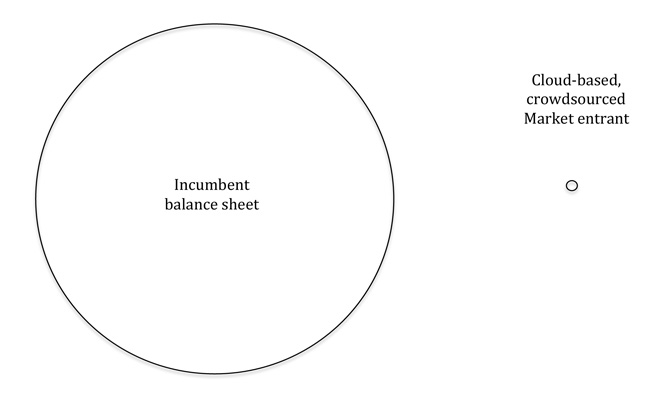 But the savings don’t just come from the amount of capital that is deployed, but also working capital / ongoing operating expenditure. Cloud-based environments like Amazon’s AWS have dramatically reduced the cost of highly scalable infrastructure, while the ‘virtual’ organisational model leads to other savings (office rent, commuting time, labour on-costs and support staff), generating a similar diagrammatic outcome. 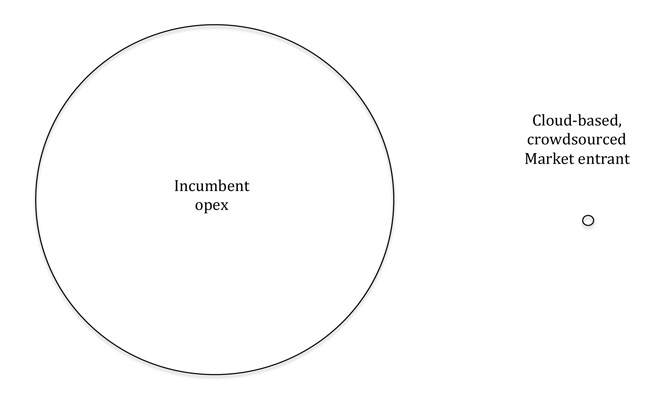 (It is this opex profile that explains why the Mclowd Platform is made available for free – since the marginal cost of a new Trustee registering to use the service is negligible).

The implications of the above anlaysis fall into two categories:

In late 2012 retailer David Jones and some of its peers announced what they called ‘price harmonisation’ – effectively an acknowledgement that price differentials between that required to support their current business models and those of global online ‘etailers’ were not sustainable.

The following article illustrates some of the supply chain impacts of this transparency:

“The internet has opened markets and purchasing choices, while also highlighting to consumers how cheap items are overseas. This has been eye-opening for many retailers, who then push back on their respective wholesalers, suppliers and importers.

It is this borderless market that forces not only consumers to re-think the way they shop, but it also forces suppliers to reconsider their own margins. It’s little wonder that David Jones are going back to the coal face of product sourcing and saying “What about me?”

The typical supply chain in Australian retail has plenty of people looking to have their ticket clipped along the way, however we’re quickly seeing the additional layers built into our pricing structures is unsupportable. David Jones is  a high-end luxury brand, yet even this organisation has been forced to reassess every level of its business in order to solidify its position in a world of shopping without borders.”

Just as retailers in Australia are now being forced to ‘harmonise’ prices against a globally defined marginal cost, so will prices deflate across numerous other vertical markets, including funds management and professional services. By triggering transparency and disinterdmediation (via the Platform and Marketplace), Mclowd will be a catalyst for this process, first in Australia, and eventually in other geographic markets.

However there are a couple of reasons why the impact on these sectors will play out differently:

This begs the question – what level of unemployment would be required to trigger wage price deflation on the scale required to harmonise prices in the market for professional services?

While this process is still in its infancy, early indications can be gleaned from statistics on supply side growth in established services marketplaces like elance.

In countries like Greece and Spain the number of contractors seeking work in marketplaces such as elance is doubling every 12 months and across the US and Europe there are literally millions of qualified professionals for whom full time employment is simply no longer an option, and who as a consequence are moving their careers ‘into the crowd’.

It is from this migration that we can make more informed predictions about the rate of wage price deflation, with the ultimate answer lying in the concept of ‘opportunity cost’.

In the traditional employment model when someone is looking for a job, they have a fairly inflexible view on the opportunity cost of their time, based on:

But a fascinating thing happens when these millions of people across the US and Europe give up on the FT employment model and move their labour into the crowd:

This is why there is such tight distribution of pay rates in crowdsourced marketplaces.  Transparency to this globally defined price means that demand and supply quickly merge in a very liquid market.

Businesses and individuals that are not directly affected by the micro-economic consequences will over time feel the macroeconomic impact.

As I mentioned in a previous blog post, the speed of the macroeconomic impact will be correlated to the extent of the price differential between local labour costs and those which are available ‘in the crowd’.

On the other hand the scale of the macroeconomic impact will be correlated to:

Given Australia’s heavy reliance on service-based industries and high household debts levels, it is reasonable to estimate that (as and when they emerge) Australia will be at the forefront of the macroeconomic impact of crowdsourcing.