Crowdsourcing is moving out of the early adopter phase and has now gone viral in many markets, driven in large part by the per unit labour cost savings (up to 90%) on offer.

To date penetration has been centred on the SME space, with P2P micro-tasking also gaining attention. Extension into the Enterprise space will follow as larger organisations develop (or acquire) the skills required to manage a distributed workforce.

As this paradigm shift gathers pace globally the impact will move from micro to macroeconomic.

In the 20th century labour markets were heavily segmented along geographic lines, as a consequence of barriers to mobility such as language, culture, technology and immigration laws, as well as the relative skills base (which reflected historical investments in education and training).

These relative investments in education also created a stratification of the global labour market along developed / developing country lines.

Within these developed / developing country segments, labour pricing tended to be inflexible, reinforced in some individual markets by specific regulations (particularly Europe).

Another factor which reinforced the ‘geographic’ nature of organisations and work was the location of the ‘assets’ to which the work related.

While this linkage is clear in the case of physical goods (such as manufacturing or agriculture), it was equally applicable to knowledge workers. An accountant might work on a spreadsheet which was located on the hard drive of his desktop computer, creating an “umbilical cord” which tied his or her value-add to a physical location.

Similar restrictions would have applied to numerous other knowledge-based roles:

This paradigm can be illustrated by the following diagram;

The migration of “content” to cloud-based networks powered by the likes of Amazon, Google and Microsoft is rapidly breaking the physical nexus between knowledge-based workers and the organisations which engage them.

At the same time Crowdsourcing marketplaces such as elance, odesk and freelancer have created a frictionless mechanism to link supply and demand. (For a more detailed discussion on Crowdsourcing see: http://mclowd.com/harnessing-the-power-of-the-crowd/).

To date Crowdsourcing has been viewed from the perspective of the individuals involved http://www.ft.com/intl/cms/s/2/1e12826e-270c-11e1-b9ec-00144feabdc0.html#axzz1ge3WapJz or the organisations who engage them. But the rate of growth of these networks https://www.elance.com/q/online-employment-report now warrants an analysis of the macroeconomic implications of Crowdsourcing, particularly for developed country markets.

In the 10-15 years prior to the GFC, credit growth acted as an “accelerant” driving unsustainable economic outcomes, particularly in the US, Europe and Australia. These debt levels (both public and private) were accumulated on the assumption that GDP (and GDP growth) would be sufficient to service these debts for many years to come. However as illustrated by the example of Greece, as public debt levels approached or exceeded 100% of GDP, it became mathematically impossible to repay the debts unless GDP growth exceeded the weighted cost of the debt burden.

Unfortunately Greece (and the wider Eurozone crisis) also illustrate that in the case of public debt there is no effective mechanism for managing sovereign default, particularly in the context of highly interconnected capital markets.

While the US and Europe have ‘invested’ in measures to contain the impact of their debt levels, they are now trapped in a macroeconomic no-mans-land which would be very familiar to the Japanese, where growth is insufficient to finance the process of deleveraging, leaving the prospect of years, if not decades of austerity and an inability to clean up “zombie” balance sheets without risking outright collapse of the banking system.

The Role of Unemployment

Partly as a consequence of the above, post-GFC unemployment remains stubbornly high, and in some cases is continuing to increase as efforts to rein in structural deficits leads to GDP contraction: http://www.ft.com/intl/cms/s/0/7d5b5910-8555-11e1-a75a-00144feab49a.html#axzz1s9Lc5g3I

Over the next 2-3 years unemployment will become an important factor in the macroeconomic mix, as highly skilled knowledge-based workers in developed country markets are forced into the crowd, just as demand-side growth is accelerating.

This is reflected in recent statistics from www.elance.com on supply-side growth within their network during the March 2012 quarter. 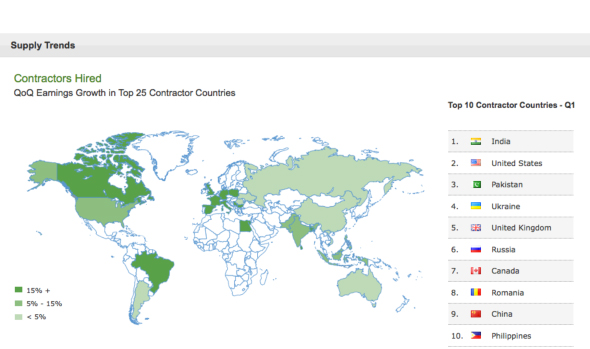 The fact that developed-country labour markets such as the US and UK are represented in the top 5 in terms of QoQ earnings growth reflects the absolute numbers of unemployed, and how they are now starting to use crowdsourcing networks as valid employment strategies, notwithstanding the lower rates on offer. (Year-on-year Spain and Greece reported more than 100% growth in earnings in the same report).

This is critical to the rate of growth of crowdsourcing. The point at which crowdsourced resources become available in-country at globally-defined prices (ie an accountant doing work in Spain for a Spanish client at US$10 per hour) will be a tipping point in terms of both the volume of work which is being processed, and the rate at which wages (for that particular task) deflate to a globally standardised rate.

In this context networks such as elance, freelancer and odesk have become conduits for the export of wage-price deflation on a global scale, breaking down many of the barriers that have supported price differentials across labour markets to date.

This process has the potential to re-ignite the debt crisis in Europe and put further pressure on the US fiscal position.

The speed of the macroeconomic impact will be correlated to the extent of the price differential between local labour costs and those which are available ‘in the crowd’.

The scale of the macroeconomic impact will be correlated to: