Disruption and Diffusion in the Energy Sector: The Role Played by Zero Marginal Cost (Part 1)

“In rural areas individuals and communities may find it economic to disconnect from the grid.”

In early May Tesla announced its long-awaited move into electricity storage.

While it is not the only player looking to grow this market, lending the weight of the Tesla brand to storage is like Google getting in to driverless cars: it greatly increases the probability of crossing the chasm.

Over the last ten years incumbents in the electricity generation and distribution industries in Australia have spent some $50 billion gold-plating Australia’s Second Industrial Revolution energy infrastructure, largely on the assumption that consumers would simply pay whatever amount was required to cover the cost of production (including a very healthy return on that capital expenditure).

As with so much of the capital that has been deployed in the 21st century, that assumption has proven to be invalid, with demand proving to be far more elastic than they forecast, and the growth of rooftop solar impacting both the demand and supply sides of the equation.

As the wholesale prices have declined due to oversupply, coal-fired power stations such as those at Wallerwang (NSW) and Stanwell (QLD) have been mothballed (if not closed altogether).

Storage – The Killer App for Renewables?

Storage may well be the killer app of renewable energy, and at the very least it fundamentally changes the micro-economics of investing in rooftop solar.

Up until now that investment has been driven by two factors:

• Subsidies on the up-front cost of installation
• Feed-in tariffs

Deflation is steadily reducing the role of the first (the per unit cost of solar panels has fallen 85% since 2007), and storage (including electric vehicles) makes the second largely redundant.

Some simple maths illustrates how the economics of solar power is changing.

While they differ between states, feed-in tariffs range between 6-8c per KWh (the more generous FIT have or are being slowly phased out). This amount is credited back to the customer for any energy they do not use on site (a perennial problem because residential generation peaks during daytime hours, while usage peaks in the evening).

What storage does is that it multiplies the return on investment for rooftop solar (and any other micro-generated energy), because the ‘prosumer’ is effectively getting the full retail rate for their energy, not an arbitrary per KWh rate.

Retail electricity tariffs vary widely between peak and off-peak, but as the following chart from the Australian Energy Market Commission illustrates, prices in Australia are amongst the highest in the world. 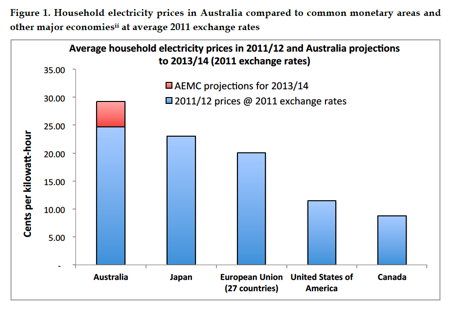 Investment bank UBS recently published a research report which calculated the internal rate of return (IRR) on solar under existing subsidy arrangements, and in the absence of subsidies. 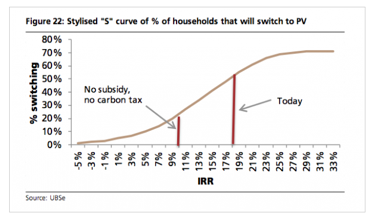 What is interesting is that the UBS estimate for IRR (under the non-subsidy scenario) is almost 10%, which needs to be seen in the context of the fact that the return is almost guaranteed.

Whether due to greed or ignorance, incumbents in the Australian electricity sector have inadvertantly created a scenario where the investment required to fund their displacement offers the highest risk-weighted return of any investment anywhere in the world.