The Rise and Rise of WordPress: Implications for Platform Investors

About 10 years ago I was involved with a company which was marketing a proprietary web content management system (CMS) called Komodo.

At the time the exponential growth in web content meant that the CMS space was white hot, and large amounts of capital were being deployed.

I have been reminded of the Komodo story while reading the various announcements about capital being raised for the development of investment management platforms in Australia.

A decade ago the capital being pumped into proprietary CMS platforms was deployed on the assumption that the underlying intellectual property could be ‘rented’ to customers using traditional subscription-based licensing models indefinately (or at least for a period that supported a positive net present value calculation).

At least in the short term, this ‘leap of faith’ assumption proved correct, and a substantial industry emerged.

While a premium enterprise category emerged, as the following chart illustrates, more than 70% of the 1 million most visitied websites today are powered by free, open-source CMS platforms, with WordPress the outright leader. 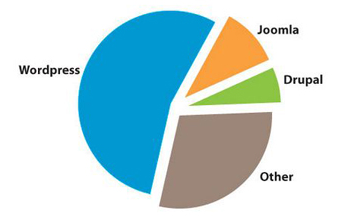 (WordPress market share is continuing to grow, from 51% to 59% in the last three years).

Despite all of the investment that was made in proprietary technologies, it appears that there was a direct inverse relationship between the amount of capital that was deployed and the probability of long-term market success.

The evolution of the CMS industry provides some sombre lessons for the investors who are committing so heavily to the investment platform space in Australia and elsewhere.

The evolutionary process can be broken down into several distinct stages.

In the early days of the Internet websites were maintained in pure HTML form. While visitors to a site would not have noticed, there was a lot of ‘heavy lifting’ involved in updating individual pages, let alone creating a new site from scratch.

As a consequence of the growth of the Internet, the size and impact of this problem grew rapidly.

The size of the problem presented opportunities to create value by making the process of generating HTML content less labour intensive.

This opportunity naturally attracted entrepreneurs looking to capture some of this value.

The growth of proprietary CMS technologies such as Komodo amounted to a 21st century version of the wheel – an elegant solution to what had become a very big problem.

With the benefit of hindsight there were two fundamental weaknesses to the traditional entrepreneurial approach to CMS software development:

In stage 2 the proprietary CMS platforms gained traction and many grew quickly. Komodo attracted more capital and growth across the industry soared.

But as I described in an earlier blog post, within their success was embedded the seeds of the incumbents’ ultimate decline.

As the NPV of the revenues in the industry grew, so did the incentive for the wider developer community to create open-source platforms, created by groups of developers looking for a solution that fitted a global audience at far lower cost.

While not intentionally Lean Start Up, these efforts usually grow iteratively, as more and more members contributed to what amounts to a Community of users and developers. (Importantly large chunks of equity capital are absent from this process).

This outcome is reflected in the level of interest in the major open-source CMS platforms, which took off from 2005, as illustrated by this chart from Google Trends. 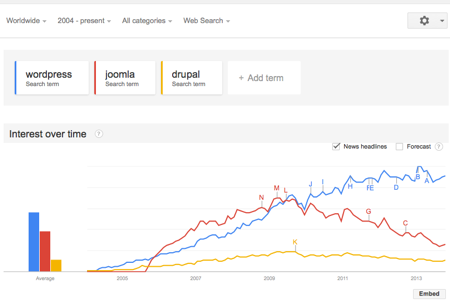 What happened towards the end of the second stage (2000 – 2005) was that users and developers began to realise that relying on proprietary solutions was a very costly way to solve the underlying problem.

The Role of Governance

But of course co-ordinating the efforts of a number of ‘open-source’ developers requires some form of governance.

Within the CMS space we have the examples mentioned previously (WordPress, Joomla, Drupl), but there are various examples from other markets including:

It is a simple fact of modern business that traditional organisational structures / business models are no longer required to generate high quality technical and commercial outcomes.

The Implications of Crowdsourcing

By providing access to millions of qualified software developers, crowdsourcing has created a hybrid of the open-source model, allowing entreprenuers to craft multi-sided business models with a fraction of the capital that was previously required.

As I mentioned earlier, there is evidence to suggest that where generic, cloud-based software is concerned, there is an inverse relationship between the amount of capital being deployed and the probability of long-term market success.

(However where network effects or significant economies of scale are involved, it is far less likely to be the case).

But where those characteristics are in play, the whole concept of the Balance Sheet needs to be inverted: ‘Assets’ have become ‘Liabilities’.

The implication for Mclowd is clear.

Maximising the probability of long-term success means not just applying Lean Start Up principles, but operating a fundamentally different governance model – one where there is little (if any) balance sheet attribution given to the underlying investment management software.

Instead a new balance sheet taxonomy is required, where assets are represented by contributions being made to the Mclowd Community by the Community itself.

A good example would be crowdfunding of the accounting software, where individual projects (such as a new Report) are posted on the Mclowd website (or a dedicated crowdfunding site such as Pozible), with individual Users contributing small amounts to ensure the functionality is delivered.

The presumption that there is some sort of arbitrary boundary that would protect accounting / investment management software from the above process is not supported by the evidence.

In fact there are strong parallels between the two:

There are also numerous examples of rapid and wholesale price deflation within related markets, including:

(Of course Mclowd is specifically targetting the investment management industry, and will gradually extend its footprint beyond SMSF).

The Mclowd vision is to improve net returns for investors.

Realising that vision involves the provision of a free ‘content management system’.

In effect Mclowd is looking to become the WordPress of the funds management industry – and just as WordPress saves web publishers hundreds of millions of dollars each year in licence fees, by replicating incumbent intellectual property Mclowd will save investors enormous sums of money vis-à-vis the licence fees payable for investment administration platforms.