Self Interest and the Decline of Rent-Seeking Behaviour

While the capitalist market is based on self-interest and driven by material gain, the social Commons is motivated by collaborative interests and driven by a deep desire to connect with others and share.

The Zero Marginal Cost Society: The Internet of Things, The Collaborative Commons and the Eclipse of Capitalism; Jeremy Rifkin, p 18

In previous blog posts I have sought to emphasise that Mclowd is disruptive not as to technology, but rather governance.

In his book Rifken describes how as part of the Third Industrial Revolution we are collectively migrating from an economy based on self-interest to a society based on collaboration.

The evolution and growth of the Mclowd Community over the last couple of years has taken place concurrent with the drafting of the book, and reflects many of the forces which Rifken has described so eloquently.

In concept SelfWeath is a great idea: peer-to-peer analytics that can assist investors to improve their individual returns by learning from each other.

However in execution SelfWealth is fundamentally flawed, for the simple reason that from inception it has been driven by a traditional business and governance model that is rapidly being overtaken by the forces driving us to a near zero marginal cost society.

The Decline of Rent-Seeking Behaviour

As I have described in a previous blog post, the confluence of cloud computing and crowdsourcing is triggering unprecedent rates of deflation which have and will continue to compromise subscription-based revenue models (on which SelfWealth has raised approximately $5 million).

Even a few short years ago such an IP-based strategy would have been considered de-riguer for any aspiring software company: create proprietary software / patents and seek to use those intellectual property rights to support a revenue model / create barriers to entry for competitors.

However by investing so heavily in this strategy the Directors of SelfWealth have failed to understand that their largest competitor is actually their customers, who can now go to the Crowd and replicate that intellectual property for a fraction of the NPV of the licence fees SelfWealth is targetting.

The consequence of this should not be underestimated by SelfWealth and all other rent-seeking incumbents:

Any attempt to enforce intellectual property rights will only highlight to existing and prospective customers the rent-seeking behaviour that those customers are no longer willing to support, driving them away from, not towards the incumbent.

(It is inevitable that the Mclowd Community will extend its technology platform to include P2P analytics).

The Role of Governance


Relative to their footprint the governance of SelfWealth is capital intensive, and as private and public equity markets begin to grasp the micro-economic realities of a near zero marginal cost society access to further capital will become increasingly difficult / expensive.

(While Mclowd faces exactly the same environment and challenges, the Community is operating a fundamentally different, crowd-sourced governance model, and has enforced the discipline of near marginal cost pricing from day one).

The point at which capital is no longer available will occur when the NPV of expected future cashflows falls below the NPV of the capital deployed, as illustrated by the following diagram. 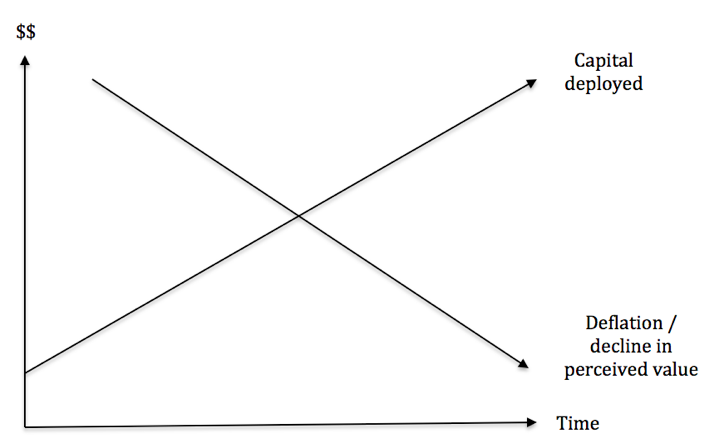 The decline in perceived value is illustrated in the fact that pricing for SelfWealth has fallen by 80% in the last 12 months (from the nearly $100 per month that was being asked in 2013, they have now cut that to just $19.95).

While my comments may be unwelcome in some quarters they are not intended to be competitive in nature.

I have simply used the story of SelfWealth to highlight the reality that if Australia is to maintain (let alone improve) our standard of living, we cannot afford to deploy capital in a manner which ignores the micro-economic reality of our collective journey towards zero marginal cost.

(I could just as easily have used the $1 billion purchase of MYOB by Bain & Co, or the $150 million deployed by XRO).

While innovation and entrepreneurship are essential, no one – including the Members of the Mclowd Community – benefits from capital losses, and catastrophic balance sheet losses incurred by incumbents will be a hallmark of the Third Industrial Revolution.