A Hole in the Jackson Hole Narrative? 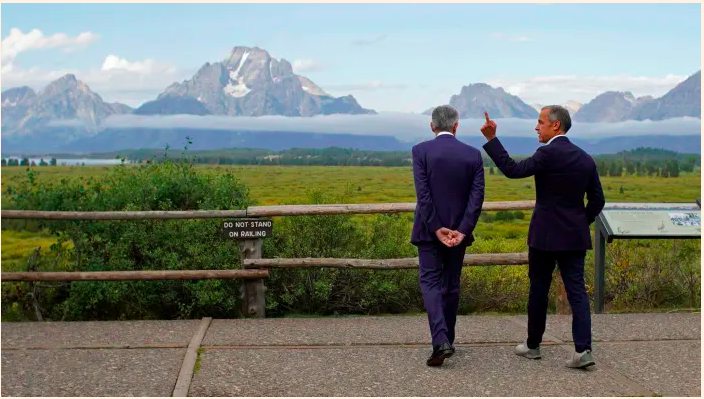 Kay’s comments were echoed by Leonard Quong, an analyst with Bloomberg New Energy Finance, who told the conference: “The costs are coming down faster than I can update my charts.”

They have become a key driver of growth in utility-scale solar and wind projects, which have driven intermittent energy sources towards 50% of overall generation at increasing intervals.

However this blog post isn’t about renewable energy. It represents a hypothesis as to why (extreme) monetary policy measures are proving to be so ineffective at reflating economies (across the developed world in particular).

Since the Reneweconomy article was published in June of 2018, PPA’s are now being quoted at rates as low as $40/MWh, which is a significant discount to average / forward wholesale rates, which range from $65 – $300 depending on the time of day:

At the same time growth in intermittent generation is causing significant volatility in the wholesale market (often pushing prices towards or below zero, but with spikes in excess of $10,000 per MWh).

Embedded in the economics playing out in Australia’s wholesale electricity market are powerful deflationary forces which are being exacerbated by monetary policy settings, which were (ironically) designed to create precisely the opposite outcome.

Economic activity in the second half of the 20th century was dominated by manufacturing (which in the 1960s represented 30% of Australia’s GDP).

This was naturally reflected in microeconomics.

While capital intensity will vary, in a typical manufacturing business marginal cost will not only not be zero, it will often be a material proportion of the overall cost structure of the business, comprising elements such as:

Perhaps a simpler way of thinking about marginal cost would be in the construction of a house.

The marginal cost of building the house would include:

These components might well make up 80% (or more) of the sale price, and under these circumstances supply would be highly responsiveness to any change in price (the economists refer to this as elasticity).

And herein lies the key takeaway from the above analysis: the greater the proportion of price which is represented by marginal cost (ie the lower the gross margin), the more resistant price will be to any deflationary / competitive forces.

In the 21st century our modern economies look fundamentally different.

In Australia manufacturing now represents less than 8% of the economy, which is increasingly dominated by service industries (60%).  Amongst those service industries, digitisation is rampant (leading to more and more examples where marginal cost is / will approach zero).

But it is in relation to these PPA’s that we can literally see through a window into our macroeconomic future.

Once the construction phase has been completed, the cost structure of a solar farm approaches zero (there being only a bare minimum of maintenance required).

Except of course for the cost of the capital deployed.

And here we begin to see the deflationary role that monetary policy is playing (amplified in the case of renewables by the fact that the cost of the underlying technology has been in freefall for more than a decade).

Because the weighted average cost of capital (WACC) has been driven to unprecedented levels, and because WACC has begun to make up a larger proportion of marginal cost, prices – such as those being quoted for PPA – are being driven down, not up.

If this hypothesis holds true, it would also imply the diffusion of deflation (via second and third order affects) across the economy.

For instance if a large energy user signs a PPA at less than 50% of their historical per unit cost, this will impact their cost structure, and where they operate in contested markets, this will likely lead to per unit price deflation.

In this way deflation can be defused from a node (such as renewable energy), into the broader economy.

The fact that wage / price inflation has been so weak over the last decade provides further evidence to support that extension of the hypothesis.

Central bankers around the world have become increasingly frustrated by their inability to generate inflationary outcomes in their respective economies.

By driving down the weighted average cost of capital, it appears that they have:

Depending on the veracity of the above analysis, their collective efforts are unlikely to be without consequence.