“A second explanation is that we are overlooking actual output – and thus productivity growth – because the new information-intensive goods and services are hard to measure, and their costs may be falling faster than standard methods allow us to gauge.”

Harvard University Professor Joseph Schumpeter (who coined the phrase ‘creative destruction’ in the 1930’s) would no doubt be impressed with the innovation which is going on in what has become known as the ‘fintech’ space in recent years.

However in this article I wanted to take a step back and:

Every single person reading this article has spent their entire lives living within a capitalist paradigm.

As such the following quote from Jeremy Rifkin offers valuable context:

“A paradigm’s narrative power rests on its all-encompassing description of reality. Once accepted, it becomes difficult, if not impossible, to question its central assumptions, which appear to reflect the natural order of things. Alternative explanations of the world are rarely entertained, as they fly in the face of what is accepted as unambiguous truth.

But this unquestioning acceptance, and refusal to envision alternative explanations, leads to a festering of inconsistencies that pile up until a tipping point is reached where the existing paradigm is torn apart and replaced with a new explanatory paradigm better able to marshal the anomalies, insights, and new developments into a comprehensive new narrative.”

I have chosen to include this quote at length because what I will be proposing in this article represents a paradigm shift that will be difficult for many readers to accept.

As Rifkin has suggested, proximity to a paradigm shift is measured by the build up of ‘festering inconsistencies’. As it turns out that is exactly what we now see happening around us every day.

These inconsistencies fall in to two categories:

The above bullet points indicate that over the last ten years incumbents across both the economic and political spectrums have been employing increasingly desperate measures to maintain a status quo that now appears to be unsustainable.

Providing some historical context to those efforts may explain much about the destination to which we are all headed.

The First Industrial Revolution maps broadly to the 19th century, and was built on three pillars:

In addition, it was (not surprisingly) a period of capital intensity. Building out the First Industrial Revolution infrastructure (such as the railroad systems in the US, UK and Europe) involved vast amounts of capital, as well as new approaches to the organisation of collective human effort.

The Second Industrial Revolution maps broadly to the 20th century, and was also built on a number of pillars:

While the above are self-explanatory, a couple of other factors are worthy of note.

As with the First Industrial Revolution, governance during the Second Industrial Revolution was centralised (both political and economic). Most of the decisions relating to society and the economy were made by either the Executive, or the Board of joint-stock companies.

These decisions governed such things as the deployment of capital (public and private), and as economies become more complex, the regulatory environment.

Again capital-intensity was a key characteristic (for instance the US interstate highway system). Importantly, as the century progressed scale economies allowed the gap between Price (P) and Marginal Cost (MC) to shrink, thanks to the advent of new technologies (which supported the mass production of physical goods).

While it may not be apparent to all, we are already deep inside the Third Industrial Revolution, and this is where things start to get interesting.

The Third Industrial Revolution pillars include:

Other factors at play:

The above can be summarised into two key themes:

While in principle the Third Industrial Revolution represents a continuation of a 200-year journey, the difference is that now the decline in capital intensity is not 20-30% (in a single product cycle), but can be as high as 70-90%.

An example would be the cost of solar panels, which represents a key piece of Third Industrial Revolution infrastructure. Per unit costs have fallen 80% since 2008, and the decline is expected to continue in coming years.

(For the sake of brevity I will refer readers to an earlier Mclowd blog post which deals with this phenomenon in more detail).

The decline in capital intensity has been reflected in (and reinforced by) the trend towards decentralisation.

Whether it is rooftop solar, 3D printing, Wikipedia, Airbnb or some other example of the ‘sharing economy’, governance is being decentralised, as consumers become producers (with balance sheet intensity drying up as a consequence).

We have just started to see the impact of the Fourth Industrial Revolution, and this is where the capitalist rule book gets pretty much thrown out the (driverless car) window.

What we are seeing is a fusion of the physical, digital and biological worlds, and largely as a consequence of this, we are faced with a future where capital may itself be largely absent.

The Role of Capital Intensity

It is important to understand that the weighted average cost of capital (WACC) forms part of marginal cost, since any capital (debt or equity) which has been deployed must be serviced over time.

As such the cost of capital will be reflected in price.

While this is nothing new, it is critical to understand the role that capital intensity is now playing in terms of triggering deflation, as illustrated by the following diagram. 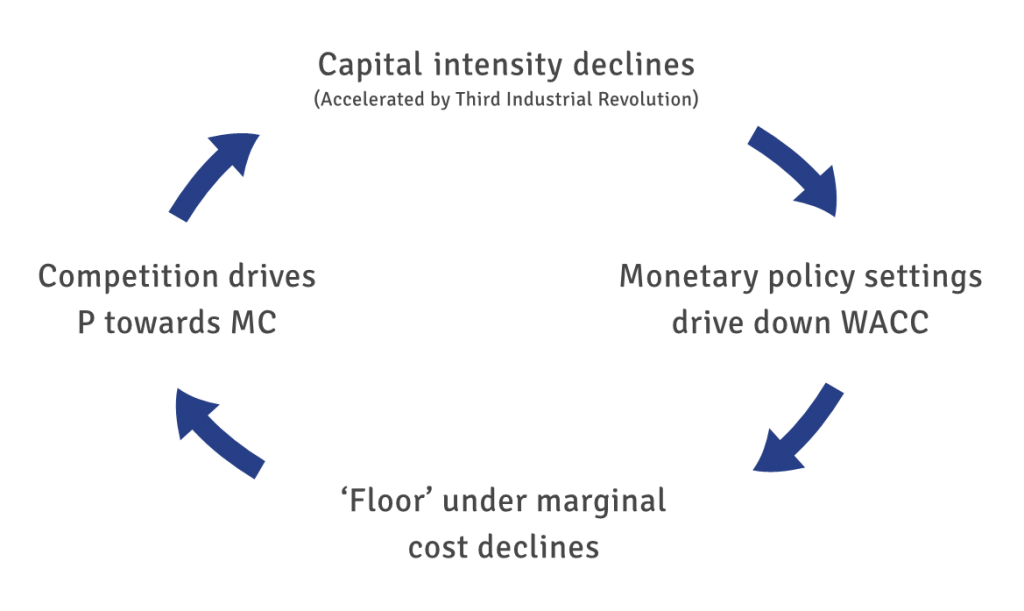 This is the ultimate irony of monetary policy in the 21st century. The authorities thought that by driving down the opportunity cost of capital they would be supporting inflationary outcomes.

Instead, the decline in the opportunity cost of capital – when combined with the reduction in capital-intensity – has triggered a collapse in marginal cost. Schumpeter’s creative destruction has done the rest, and in the process created a feedback loop that is accelerating our journey towards a Zero Marginal Cost Society.

I’m conscious that the concept of a Zero Marginal Cost Society is one that very few people living within a capitalist paradigm will be able to digest, so I will provide a simple (non-fintech) example to illustrate the process.

In May of 2016, the Dubai Government held an auction for the provision of a large-scale (800MW) solar power plant.

Without subsidies, the price quoted fell to a record low of US$2.99c / kWh.

If anyone had suggested a few years ago that you could profitably generate utility-scale solar at US3c per KWh they would have been laughed at.

Capitalism has delivered us (nearly) free solar energy because the marginal cost of renewable energy is approaching zero, and under those circumstances price was always going to approach zero (and as a consequence of the forces described above, much faster than most people realise).

What applies to energy also applies to most of what we today think of as ‘the economy’ (and particularly the financial services industry, where marginal costs are in many cases zero).

Any fintech entrepreneur who thinks that they are somehow immune from this process is kidding themselves (and their investors if applicable).

As more and more mousetraps become free, the (rather noisy) process of creative destruction – which has driven capitalism relentlessly forward since the beginning of the First Industrial Revolution – has begun to weaken. Under these circumstances it is only those organisations that can operate at (or adjacent to) marginal cost that will survive.

Relationships within the Collaborative Commons will gradually solidify – particularly where governance has been well managed – and a relative quiet will ultimately (and inevitably) descend.

On the basis of the above analysis I would caution anyone involved in the deployment of capital (fintech or otherwise) against doing so under circumstances that do not support pricing at (or at least adjacent to) marginal cost.

Anything less is likely to lead to a governance nightmare, where it becomes impossible to reconcile the competing interests of: